On Tuesday, June 6th, at the new Central Kitsap Farmers Market, Dorothy Lind, executor of the Gerald Petersen Estate presented the Kitsap Community & Agricultural Alliance (KCAA) with a donation check of fifty thousand dollars ($50,000). The generous donation was a gift from the Estate in recognition of Scott & Peggy Hall.

The Halls were deeply involved in the historic Petersen Farm before the passing of Gerald Petersen in 2009 and continued to be champions for the farm through the inclusion of the land under a conservation easement as well as during the sale of the farm in 2015. The Halls, owners of Legacy Farm in Olalla, have been long-time stewards of agriculture in Kitsap County, as well as long-time board members and supporters of KCAA.

“We are so overjoyed at the generosity of the Estate for honoring the KCAA” stated Peggy Hall during the presentation. Bob Geballe, board president of KCAA, said the gift was a testament to the hard work and long-time commitment the Halls have shown the farming community. “We are speechless, and we are so deeply in debt to Scott and Peggy, whose tireless work and generosity has borne such fruit for us as an organization.” Geballe said the donation moves KCAA onto a new level in terms of how it can impact local agriculture. “We have several new initiatives in the works; creating an intellectual resource bank for farmers, developing a matching service for people interested in farming and property owners interested in having their land in production, working with local educational institutions to develop scholarships, programs, and internships to fill the pipeline with prospective new farmers. This is going to help us make those things happen.” 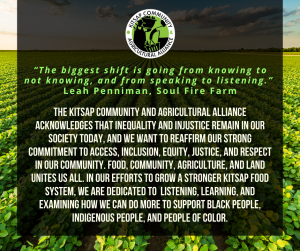